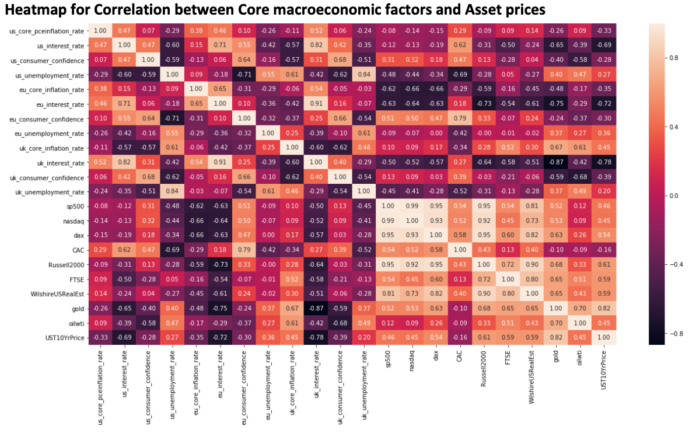 Legal Disclaimer – This research is not an investment advisory or a sales pitch.

Charts comparing macroeconomic data for 2018 and 2019

Data used for this analysis along with sample code and results are given in the below Github location – https://github.com/datawisdomx/Monthly-Asset-price-relationship-to-Macroeconomic-Data

Note – This research is based on a very simple premise and small data set. This by itself not sufficient for all possible variations to the relationship between the macroeconomic data, asset prices, timeframes and other factors like political & central bank data, etc. Users can test that on their own and use as they see fit.

Mixed data from US. Inflation continues to rise with good retail sales. But deficit has widened and TIC flow has fallen. Primarily due to more federal spending, trade war impacting demand for US assets along with asset rotation to other markets as US markets have peaked. Shouldn’t be a problem given strong growth, tight labour markets and US outperforming all other major economies. Trade discussions are ongoing with China but there doesn’t seem to be any clear agreement and whether the new $250bn in tariff’s will be imposed. Some Fed members have made dovish comments on rate rises in relation to neutral rate (3.5%) and global economic slowdown. But December raise is still expected and 2019-2020 were expected to see slower raises. Dollar sold off a bit because of these DXY back to 96.5. Remain Bullish on USD.

Brexit is turning into a disaster. May’s proposal is being rejected across party lines. Her own cabinet members are resigning and letters are being sent for a no-confidence vote (38 known of 48 required). Bigger issue is that the Brexit proposal is a farce, worse than current EU membership. No freedom to set competition, employment, labour regulations, tax rules, state aid, environmental regulations, etc. EU rules will still apply. What exactly have they negotiated? And when will the outstanding issues like Irish backstop be resolved, possibly never. EU is making sure Brexit fails eventually. No-deal is a much better option. If May possibly survives no confidence vote, the Brexit plan still needs to pass in parliament, then they need to “keep negotiating” with EU till 2021. This is not good for UK economy. Uncertainty for 2 years with such a bad deal, with already weakening data will make it worse.

Most data is weakening including inflation, retail sales and retail prices. Only employment data is steady. GBP is back at 1.28. Remain Bearish on GBP.

EU is facing a severe fall-out from the trade war and global economic slowdown, being export driven, especially Germany. German GDP contracted by -0.2% and ZEW survey remains -ve. Italy budget disagreement continues. Most data are showing flat growth with employment falling. ECB will probably maintain their current dovish stance given the slack in the economy and low core inflation. Brexit, while not having an immediate impact, will become an issue if there is a no-deal Brexit, which is a possibility. Impact of strong USD continues to be felt. EUR has bounced back to 1.14. Remain Bearish on EUR.

Chinese credit tightening continues with money supply/financing/loans falling. Other economic data is slowing too. There is no agreement on the trade tariff’s yet and the global slowdown is impacting import/export flow. Chinese economy will continue to cool.

Japanese economy continues its roller-coaster growth with GDP contracting by -1.2% QoQ in 3Q. BoJ now has a balance sheet larger than the economy, that should be a warning sign. Global slowdown, trade war and highly leveraged balance sheets are impacting growth along with one-off natural calamities. The 0% rates and huge monetary expansion they have been doing for decades has not solved the fundamental population/demand contraction they are facing. USDJPY is back at 113. Remain Short on JPY.

Indian economy is steady with falling oil prices reducing inflation. Politics will be a big driver for the next few months due to state elections. USDINR is back at 72. But with strong USD, slowing global growth, 75 and beyond can be tested. Remain Bearish on INR.

Brent Oil tested lows of $65 post OPEC demand falling and supply increasing bearish report. This was expected for a while considering global slowdown, strong USD, monetary tightening, increasing supply. Oil producing countries geopolitical risks and Iran sanctions have faded too. Demand for other commodities has also been falling/at lows due to some of these factors. Remain Bearish on Oil.

US economy is starting to slowdown as visible in the recent data. Impact of China trade war, global slowdown, and high rates is being felt. Inflation/Prices/Retail sales are falling, forward looking indicators like ISM/PMI are falling, US stocks are getting sold, oil is back below $60, 2s10s spread tested lows of 11bps and Fed has been making dovish messages. Expectation is for December to be last raise for now and only one more for 2019 if required. FOMC minutes will be closely watched for any indications. US economy/stocks have peaked for now though still outperforming G7.DXY is staying below 98. Short USD.

Brexit has turned into a disaster with May’s renegotiation visit totally rejected by EU. There is no desire from EU to work with UK as their objective is to make Brexit fail. She faces revolt at home with calls for another referendum/election despite surviving a no-confidence vote. Most economic data is weakening with inflation/prices/house prices/manufacturing, industrial production falling. Only unemployment/wages are steady. BoE has maintained its No-deal Brexit recessionary stance. Brexit having severe impact on UK economy. GBP went below 1.25 with 1.20 (Brexit vote lows) in sight. Short GBP.

EU economy is also weakening with most data falling. Inflation/PMI falling with France seeing contraction due to widespread public protests against fuel tax hike. Italy budget issues seem to be subsiding as Italy is ready to negotiate, though nothing firm yet. Impact of trade war and global slowdown is being felt in export driven economies like Germany. Brexit is also impacting EU as no-deal Brexit will restrict free movement of goods and services. ECB has confirmed slowing growth, falling inflation (“balance of risks [to the growth outlook] is moving to the downside”) and no rate hikes till 2019 despite APP ending (but still reinvesting principal payments). EUR is stuck in a tight 1.12-1.15 range.But relatively EUR is looking oversold as their economy is growing at a healthy rate with rising wages. Long EUR.

Chinese economy is facing severe impact from US trade war and global slowdown. Most economic data is falling including inflation/retail sales/industrial production/FDI. Chinese housing market continues to slowdown. This is impacting global growth and will continue as liquidity tightens. Loan growth/money supply are being curtailed by the govt to reduce the impact of bubble in credit/real estate markets. However, Chinese stocks are oversold considering the size and future growth potential (6%+) of the economy.

Japanese GDP contracted by -2.5% in 3Q, more than expected. Most other data is steady. However, trade war and global slowdown impacts them too being a net lender to the world and an export driven economy. Japanese stocks are overbought. With global risks rising and US peaking JPY is a safe haven. Long JPY.

India saw some reversal in politics with BJP losing and Congress/local parties winning all 5 state elections. This will make 2019 elections tricky and Modi/BJP will have to consider some of their policy measures. RBI governor Patel resigning suddenly also created doubts about monetary policy. All this weighed on INR and stocks. However, BJP did not lose by a big margin in the big states and new RBI governor Das is more in line with govt views. This should enable economy friendly policies and possibly boost Modi/BJP election chances. Inflation is falling (supported by low oil prices) and economy is expected to grow at a very good 7%+ rate, outperforming all large economies. USDINR tested 72.5 again but with USD peaking, falling inflation/oil prices, 70 and below can be tested. Long INR.

Global stock markets are seeing very high volatility with any bounce back getting smacked. Confusion around US China trade deal and arrest of Huawei CFO caused huge whipsaw moves. Both are starting to resolve but now there are serious concerns about growth in 2019 and impending recession. Most global economic data is weakening and central banks are turning dovish. Any wage inflation is being countered by low energy prices / falling inflation. Companies will struggle to beat growth/profit targets in 2019 in this environment. Tech stocks continue to get sold heavily. Apple and its suppliers keep confirming falling iPhone demand and Facebook’s privacy issues keep increasing. Most G7 economies stocks are overbought especially US/UK/EU/Japan relative to emerging/growth markets. Short G7, Long India/China Stocks.

US Yield curve flattening continues with 2s10s testing lows of 11bps (below 0 indicates impending recession) and yields falling across most economies. Most central banks are turning dovish. UK/EU have no scope for cutting rates in the near term and Japan has been at 0 for a long time. US and India bonds have been the most oversold considering their yields relative to the slowing economic/falling inflationary environment. Long US/India Bonds.

Despite OPEC cuts of 1.2mn bpd Brent oil is back below $60. This was expected and demand is expected to fall further with increased supply from US/Others. OPEC themselves predict 2mn bpd fall next year. Unless they do more drastic cuts, remain Short Oil.

Please use this research keeping in mind the disclaimer below.